The country of France itself is quite the gem, seeing as you can pass a plethora of different landscapes and still be within the country. When you travel south you find yourself on the sandy beaches of the Mediterranean Sea and when you find yourself in the north you get great views of the English Channel and the North Sea. The center has everything from mountains and greenery while just a little south you’ll find yourself with sandy deserts at your fingertips. All landscapes seeming to beg for a photographic moment. We have compiled 3 of our favorite campervan drives together to help you get a great blend of French culture and landscapes. 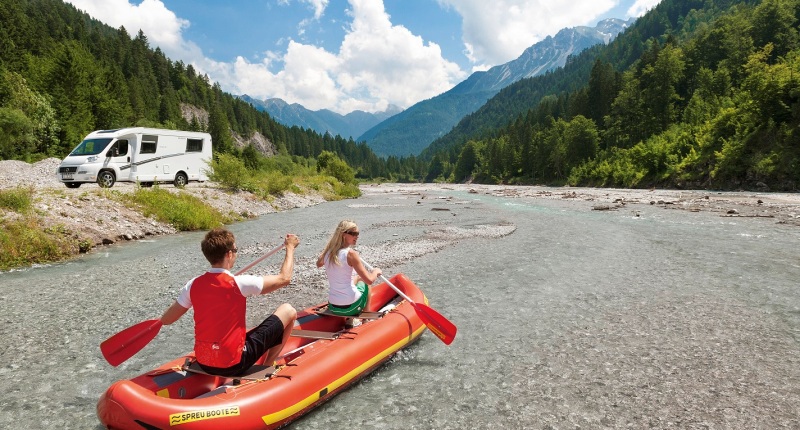 The Route Napoléon is easily one of the most important campervan rental drives in France and just had to be named after the infamous French military and political leader Napoleon. The road itself was used by Napoléon in 1815 on his return from the Mediterranean island of Elba. The drive itself is on Route Nationale 85 and expands over 325 kilometers. The route begins in Grasse, which is considered the world’s capital of perfume and ends in Nice. The entire drive is famous for rolling hills as well as views of the Alps and the luscious green valleys.

One of the most favorable features of the drive is that it is generally smooth the whole entire drive, making it a very luxurious and comfortable scenic ride where one can relax and just enjoy the views. If you are on the route, most people suggest hopping off of it at one point for the 40-kilometer detour to see the Gorge de Verdon. This is actually France’s version of the Grand Canyon, which is completely unique to the area and is quite stunning.

Cote d’Azur is easily one of the most famous drives in the world; the French Riviera is beautiful year round. Most people get the feeling it can only be visited by the rich and famous, yet plenty of budget experiences can be had on the French Riviera. On the drive, you’ll see so many infamous cities. You’ll start your journey in St. Tropez. This seaside resort town offers great panoramic views of the surrounding areas as well as provides a great glimpse into French culture and history – seeing as it was the first town to be liberated during World War 2. You’ll also get a chance to visit Cannes, which is one of the most famous cities in France outside of Paris. Obviously it is well known for the Cannes Film Festival, but there is certainly so much more to this place than that! It features great museums, festivals, and so much more.

Onward you will journey to Antibes and then maybe you’ll eventually decide to head into Monaco. Wherever you decide to explore while driving through the French Riviera, the warm weather on your skin and salt water in the air will be kind to you.

You cannot leave France without driving La route de grandes Alpes. One of the best times to do the drive is between March and October. You could also do it each month to watch the change in landscape. The spring brings flowers, the summer brings the heat, and the autumn brings the changing of foliage when everything turns into a different tone. However, one should not do it in winter unless they are an experienced driver. Each season brings a new element to this drive. If you want true french culture complete with breathtaking views, mixed with the seclusion and understanding of the country, then you need to take this drive.

This drive cascades for 684 kilometers between the cities of Thonon-les-Bains and Mento. While driving the alps, you’ll pass by the French Riviera and the infamous Lake Geneva. While making the drive, you’ll marvel at the true gems of the French Alps: Mont Blanc and Les Ecrins. If you do decide to go in winter, you can do some top notch skiing in the little towns of Chamonix and Morzine, but they can also be done in the summer time and are a great hike.

One of the longer drives is the infamous Gaspésie Tour along the Gaspé Peninsula. This 1,090-kilometer drive has been ranked the National Geographic Traveler list of the 20 Best Trips of 2011 for a reason. Starting your journey at Bas-Saint Laurent, you will drive along the coast to see historical lighthouses, shipbuilding towns, and still be once again dwarfed by mother nature. Although it is a long journey, if you don’t complete it – you won’t soon forget everything you see along the way.

Advantages of Buying a Static Caravan

Static caravans are like a second home and like a home are expensive, but if maintained well your caravan will last a lifetime.